The flexible manipulator is one of the most eye-catching parts. "Optimus Prime" has 11 joint degrees of freedom (the human hand has 27 joint degrees of freedom). Through ergonomic design, the robotic finger is very flexible, not only able to grasp large-diameter objects, but also dexterously control external devices. In addition, its articulated drives can lift a half-ton piano, travel at a pace of about 8 kilometers per hour, and more.

The "Eyes" of Robots

"Optimus Prime" is another "sharp weapon" in the field of AI that Musk once again bet on after Tesla cars. As the most technically difficult intelligent robot, humanoid robot integrates high-precision technologies in mechanical design, motion control, artificial intelligence and other fields. Among the five key core technologies of artificial intelligence, computer vision, machine learning, natural language processing, speech recognition and robotics, robotics is the concentrated expression of other technologies.

Computer vision technology, as the "eyes" of robots, is the key technology for robots to move freely. The vision system consists of image acquisition, image processing and analysis, and result output and display. The hardware is mainly composed of light source, lens, industrial camera (CCD), vision controller (or computer + frame grabber). The scene is captured by the camera, and then the algorithm calculates the size of the item, plans the road, etc., instructs the robot arm to take the action, or drives the robot to make a road plan.

One of the very important and very challenging points is that the robot needs to accurately identify a large number of items and classify the data. The implementation of the core algorithm is inseparable from the training of high-quality data. The Annotator AI-assisted data annotation platform developed by Magic Data is specially customized to form a standard dataset for computer vision. Making high-quality data become the “food” for robots, and continuously improve the recognition accuracy of robots. 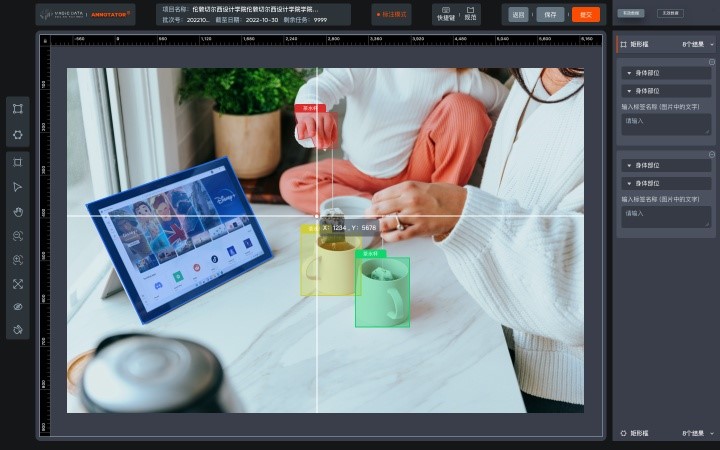 The Billion-Dollar Blue Ocean of the Robot Track

With the continuous extension of the field of artificial intelligence, technology giants such as Google, Amazon, Baidu, Tencent, and Xiaomi have entered the robotics track in various forms. The underlying logic of robots has also changed. In the past, flexibility was emphasized, and automation was the core competitiveness. Now, more emphasis is placed on interaction, and artificial intelligence has gradually become the core competitiveness.

With the enhancement of human-computer interaction capabilities, compared with other robot forms, humanoid robots can better meet the needs of emotion and companionship, which brings more possibilities to the development of robots.

As Musk mentioned, robots can not only help everyone live an easier and richer life, but also reduce overall labor costs and provide a steady stream of economic development. The high adaptability of robots can break through the limitations of industrial, commercial, and household scenarios, and integrate the market space of various applications. It is expected to become another application portal after mobile phones and automobiles, empowering thousands of industries, and having high commercial value.

Humanoid robot companies are emerging in an endless stream, but there is no one that can be truly commercialized. For this "new species", having lower cost and higher work efficiency is the key to verifying whether the product can really be brought to the market. According to Musk, "Optimus Prime" has been tested internally in the Tesla factory, and people are expected to buy it within 3-5 years, and its price is expected to be less than $20,000. The appearance of "Optimus Prime" may well break down the barriers of high cost.

Compared to the humanoid robots of industry leader Boston Dynamics, "Optimus Prime" looks a bit clumsy. But Musk said that other manufacturers' robots have overlooked two important keys in their design: manufacturing costs and a "brain" that interacts with the real environment. Those robots without a "brain" do not have the ability to solve problems on their own, and the manufacturing cost is very high, but the value created is low. If Tesla's humanoid robot can achieve final mass production and solve the problem of landing, it will be expected to promote the industrial development of humanoid robots and move towards a better future.